You may think that in order to land a job in the dev world without previous experience, you need knowledge and skill. Well, not only that. You also need courage and luck. And boy it takes a lot of courage to pivot your career. Especially when you're in an age when you've probably already established one, and senior developers are by average five years younger than you. Allow me to show you that not all hope is lost and how to increase your chances of getting hired.

Alright! Let's assume that you are confident that you want to learn to code with a not so distant goal of becoming a professional developer. What's next?

As always - the hardest part is to start. Fortunately, with the web technologies, you don’t even have to move from your couch. All that you could ever need lies at your fingertips - in the vast space called the internet. But the abundance of information is overwhelming. Tons of articles, hours of videos, and dozens of online courses should make the process easier, but frequently it’s the very opposite. Not to mention that the quality of the things you will find may and will vary. Should I take that insanely discounted course on Udemy? Should I learn from books? What about tutorials, podcasts, or boot camps? Does it contain good practices or only teach anti-patterns? Let’s get down into the nitty-gritty! (Oh, and don't make the mistake of trying to learn everything. Pick a language and stick to it!)

In the end, there are no magic beans, and you still will have to learn — a lot. To become a rockstar developer, you will have to acquire a sort of student mentality because you will have to learn until you basically retire. And don’t jump instantly into that new and trending framework everyone is talking about. Wait a while until the technology matures. You don’t want to waste your time on stuff which will not stay around for long, do you? Remember - cutting edge is not the place you want to be.

If you can't wait any longer and want to start learning NOW then I got good news for you - I put together a couple of links that can help you. You can find them in this blog post: Resources for beginner developers.

Ok, now that you’ve read most of the books and watched some of the tutorials you might think the time has come to take a look at the job market and start applying. And you're right, so do it. Did you do it? Ok, now take a look at the chart below. 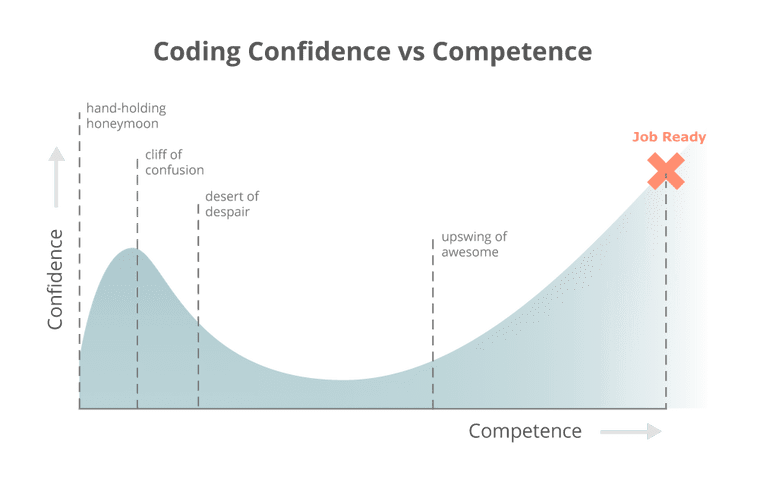 The above chart was taken from Why Learning to Code is So Damn Hard and in my opinion, it's the best representation of the Dunning-Kruger effect. What is it? It's a psychological phenomenon when people mistakenly assess their abilities as greater than they actually are, which means that they cannot objectively evaluate their competence or incompetence.

When I started to learn to code, it took me four weeks to get to the peak of the hand-holding honeymoon. I was convinced that the amount of HTML and CSS I learned was enough to land me a job. Right about then I applied for the first time. For me, it was a massive failure, and for that company, it was a complete waste of time. The downfall of confidence came shortly after. It was obvious that I couldn't assess my competences correctly. A little over a year has passed, and I can tell that I’m somewhere on the upswing. I eventually got hired, but the hard work is not over, in fact, the hard work has only begun. Let me present you another chart - the Dunning-Kruger-Slawinski effect which describes what happens when you finally find a job 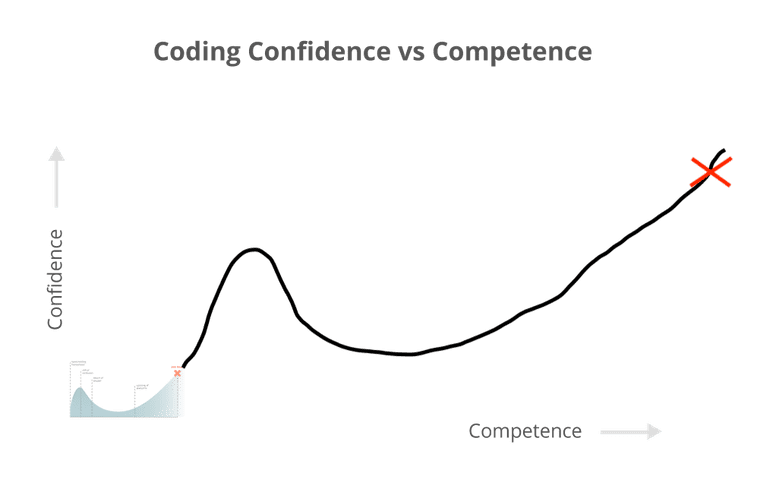 It starts all over! The cycle never ends, and the conclusion is to remember that besides the inability to recognize one's lack of ability, humans also expect instant gratification but in real life, it’s more like small increments day by day. For now, it is easier to assume that you know nothing and that this cycle repeats itself each time your life reaches a particular milestone.

Do you remember when I said that you need to start applying as soon as possible? It's because I care for you and I want you to fail. Yup, you read it right - FAIL. Failure is unavoidable in the hiring process, and sooner you realize it, the better. Failure is also free, so fail fast, as they like to say.

Who are they you may ask? They surely are not the people who author the success stories you've probably read over the internet. You know which ones I'm talking about. The ones about pivoting someone's life, taking up coding and landing a dev job in a couple of months without a CS degree. I read dozens of them, each one more impressive than the last. I'm not trying to mock anyone, and I don't have any reason not to believe them, but none of them was about someone failing and giving up.

This phenomenon has a name - survivor bias. It means that only success stories get proper visibility, and you rarely hear about someone who failed (unless you count the bulk sellouts of programming books on facebook groups for beginners that is). So if you are looking for a real-life example of someone who has been in the same spot as you are right now, then you only see a bunch of successes. Don't you think it would fair if you could also read about people who didn't make it? I believe everyone can code, but not everyone will work as a programmer. I know it sounds harsh, but I wish that boot camps wouldn't forget to mention that in their ads.

According to Technical Interviewing is Broken, But We Can Fix It and F*** You, I Quit — Hiring Is Broken, the whole thing is flawed in general. I wouldn’t know - I just started. But while I read those articles, I kept nodding my head at every point the authors have made. From my own experience after many failed interviews, I was left with a feeling of not being fairly assessed as a candidate.

I can only imagine that for experienced candidates, it has to be even more infuriating. It should be expected that they were already vetted while applying for previous jobs and probably already have created a successful code. But nooo… It needs to be checked yet again if you know textbooks by heart and can solve irrelevant algorithms on a whiteboard. What about other skills a successful candidate has to have like fitting in the team, identifying with the company values or delivering results on time?

But for someone with little to no experience, it does not make much of a difference - a failed interview is a failed interview. Anyway, in this crazy world, your chance to get a job grows with every application sent. Do you remember when I wrote in the beginning that luck is essential to become a dev? It took me seven months from sending out the first resume to finally accepting an offer for junior javascript developer. The whole thing is a matter of match and fit so keep on keeping on - you might get lucky next time. Below you will find the flow diagram of my job hunting efforts, and I recommend you to do one yourself. 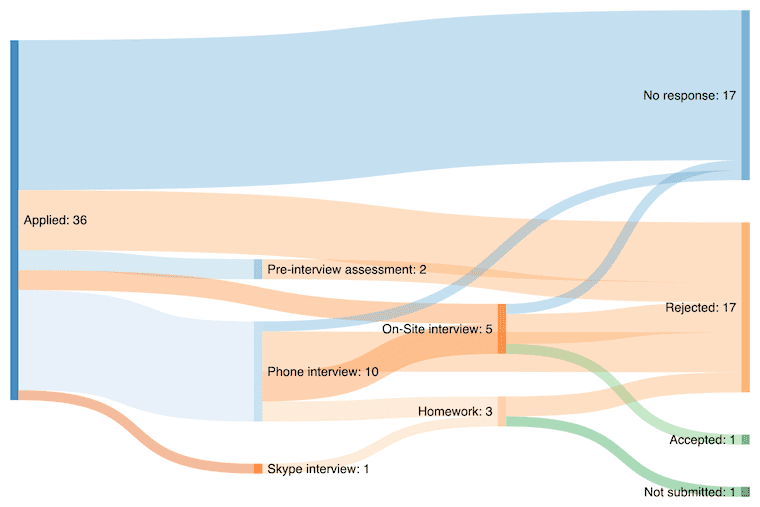 So eventually, if you'll try long enough, you will get an offer. But before you sign anything, think about what you're doing. The temptation after a long and weary job hunt might make you accept the first offer you get, but you can still end up with a dead-end job working for less than you deserve. I’m not saying never accept the first offer, I’m just saying don’t let the initial success distort your perspective. Assess the offer cold-heartedly. Is it what you’ve wanted? Can you squeeze more from it? In the end, the person who says no to things is the person who is in control of their stuff.

But you got the job! Congratulations! It’s only sweet, sweet work from now on. Do you feel comfortable? Not really? More of a never-ending fear of embarrassing yourself in front of your coworkers? Well, you might have the imposter syndrome. It’s that feeling when everyone seems smarter than you, and in your opinion, you faked your way here, and you're about to get exposed as a phony. The feeling is not so uncommon - I get it almost every day.

You might want to fight the impostor syndrome with acting that you know your stuff. Fake it till you make it, riiiight? I’m sorry. People in the company will see through you in a matter of days. Be honest. Don't be afraid to say I don't know. No one will fire you right away after you admit that you don’t know something. Hardly any new employee brings revenue in the first couple of months, even in a senior position.

I get through the impostor syndrome by making a list of my coding achievements and looking at it whenever I'm questioning my skills again. They can be even the smallest of things like I solved a merging conflict by myself or I made an alias for a very long command line. It helps a ton when I start to experience the symptoms of imposter syndrome yet again. Also the bunny from the tweet below has a spot on advice for you:

Four words: Read, Solve, Network, Create. I got where I am because I did just that - I completely immersed in programming and did nothing more for little over a year. I'm talking of course about my free time because I still had to go to work!

Read: Read all you can as much as you can. Read at home, read on a bus, read in a line in a grocery store. It works as long as you’re reading about programming. You don't like reading? Watch a video then but remember to make it relevant and watch stuff about programming.

Solve: This means whiteboard challenges. For the time being it is a required step at almost every job interview, so if you want to pass one, you need to know how to calculate that n-th Fibonacci number.

Network: Start networking as soon as you can. Try to be in the same room as people who code. Go to meetups. Make friends who are in the same spot as you. Find people to code with. Speak with more experienced programmers. Find a mentor. Can’t find a meet up nearby? Network digitally.

Create: Learn Git as soon as you can, get yourself on GitHub and start committing to your own projects the moment you create an account. The less your GitHub timeline looks like a lousy Tetris game, the better. When job hunting if you don't have the experience, your portfolio will have to suffice, so it's good to have a couple of finished projects. They don't have to be huge or impressive in any way but contributing regularly and showing progress is very important.

Here are a bunch of useful (and free!) links I wish I knew about at the beginning of my coding journey. I really hope you will find them as helpful as I did.

Hey, you're still reading! What is left for me to say is that you're about to perform the greatest stunt in your career. You may have regrets along the way, maybe cry a little (or was it only me), but that feeling of satisfaction for scoring the best job on earth is priceless. I hope that after reading this, your road to success will be much smoother.